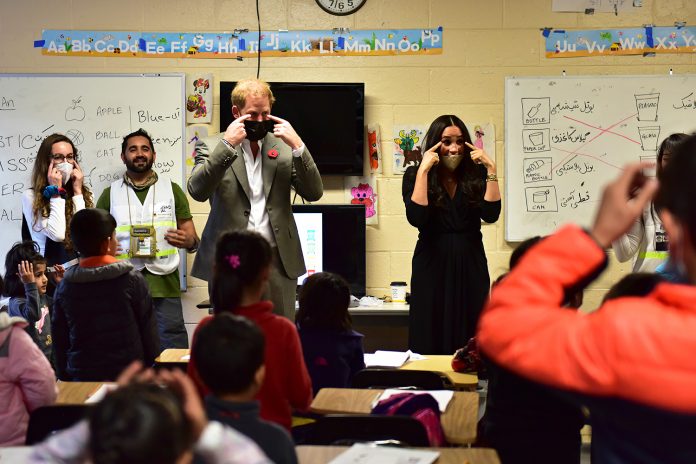 On their way back to California, Meghan Markle and Harry went to a camp for Afghan refugees. An opportunity for the couple to meet children who are learning English.

This Thursday, November 11, Meghan Markle and Harry went to a camp for Afghan refugees in New Jersey, reports the media People. Located on a military base in McGuire-Dix-Lakehurst, the Sussex couple visited a class of children, who were learning English. An opportunity for the students to sing, with them, a rhyme they had just learned, explained the Daily Mail. And this song is none other than “Head, shoulder, knee, foot”, their son Archie’s favorite. Before leaving the classroom, Meghan and Harry thanked the students in Dari: “Tashakur”.

While at “Liberty Village”, the nickname given to the camp, the couple also met “guests”. This is the name given to the refugees, revealed the Daily Mail. There, they have access to a transport service as well as medical care, the newspaper said. This rescue operation was launched after the Taliban took power in Afghanistan last August.

That same day, November 11, the Sussex couple had also joined the armed forces to commemorate the British Remembrance Day, explains People. The day before, Meghan Markle and Harry were present at the gala that commemorates the sacrifice of veterans, in New York. It should be noted that McGuire-Dix-Lakehurst is the only tri-service base in the U.S. Department of Defense, the Daily Mail revealed.